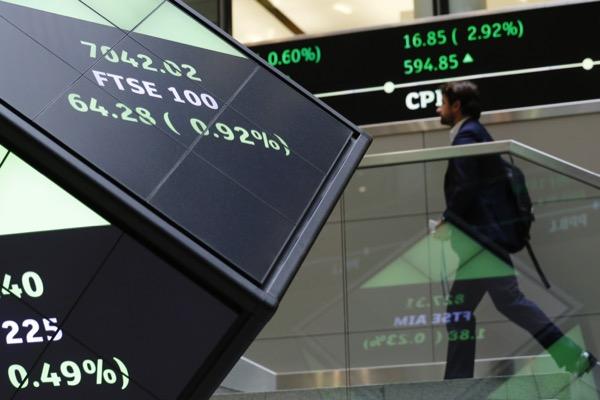 April saw the NASDAQ Composite fall by 15.1%, its worst monthly drop since the 2008 financial crisis. The S&P 500, widely viewed as a benchmark for the US economy, fell by 9.8%.

But after two years of sub-standard performance compared to its international peers, the FTSE 100 is finally having its moment in the sun. It struck 7,670 points on 8 April, fell to 7,381 by 25 April, and then recovered to 7,545 points today. This means that the UK’s premier index has barely moved over the past month.

Moreover, the FTSE 100 is up 0.5% year-to-date, while almost every other major index is freefalling. Some individual FTSE 100 stocks are even paying out record dividends.

But all are subject to the rapidly changing political and economic landscape.

AstraZeneca shares have risen by 29% since 4 February to 10,665p today. In last week’s Q1 results, the pharmaceutical giant revealed sales had soared by 60% to $11.4 billion, boosted by the strong performance of its cancer and diabetes drugs.

With multiple late-stage trials in its pipeline, AstraZeneca is second only to Shell in terms of market cap. But CEO Pascal Sobriot is currently under fire after ending the non-profit status of its covid-19 vaccine. Despite expecting declining sales of the vaccine going forwards, AZN made $1.1 billion from its jab in Q1.

It also made $469 million from Evusheld, a treatment designed for immunocompromised patients who cannot be vaccinated. Soriot has described it a ‘sad situation’ that the UK has not ordered doses, saying some patients are ‘really suffering,’ and further that ‘they also represent a pretty large proportion of the people who are hospitalised for Covid, so they do need access to this medicine.’

With the US having already ordered 1.7 million doses, a UK order in May could be the gateway for further orders globally to offset diminished vaccine income.

HSBC’s Q1 results last month were a mixed bag; pre-tax profit was $4.17 billion, beating analyst estimates but down from $5.78 billion the year before. And revenue fell by 3%, which it attributed in part to Hong Kong covid-19 restrictions hitting investment product sales.

Accordingly, it has pulled back proposed share buybacks. And with its core capital ratio down by 1.7 percentage points to 14.1%, HSBC also expects further capital falls when it accounts for a $2.7 billion loss from the sale of its French retail operations in H2.

Roughly half of its revenue and two-thirds of its profits in 2021 came from Asia, and CEO Noel Quinn is investing billions more into the region, intending to build its wealth management business. CFO Ewen Stevenson argues HSBC remains ‘massive bulls’ on Asian growth.

But Chinese insurance giant Ping An, which as HSBC’s largest shareholder owns 8.23% of the company, has called for a break-up of HSBC. It wants to cleave the Asian business away, arguing that the costs of HSBC’s global network outweigh any synergy savings.

In addition, while HSBC has historically benefitted politically from its presence in both Western and Eastern markets, it’s now at risk of becoming a political football in the increasingly uneasy geopolitical relationships between China and the US. The pair are at odds over both regulatory issues and the Ukraine war. HSBC was even summoned to a meeting on 22 April to discuss how to protect its assets from any future US sanctions.

IAG reports Q1 results on Friday, and the picture is not looking rosy for the embattled airline stock. King of its brand portfolio is the iconic British Airways, but after months of travelling chaos caused by IT issues and lack of staffing, the hoped-for summer boom could already be over for the FTSE 100 airline.

It was already battling with the cost-of-living crisis, rising jet fuel prices, the impact of the Russia-Ukraine war, and a resurgent pandemic. And now more than 1,500 flights were cancelled in April, with further disruption expected in both May and June. With reports that many customers are now booking elsewhere, BA CEO Sean Doyle is coming under increasing pressure.

Refinitiv average analyst data expects IAG to post a loss of £462 million in Q1, while Peel Hunt has halved its annual profit forecast for IAG from £839 million to £416 million.

The FTSE 100 telecommunications stock began hiking prices by 9.3% for most customers at the end of March, following a ‘dramatic increase’ in data usage over the past few years.

Managing Director Nick Lane justified that the price increases are ‘never popular but are sometimes a necessary part of business.’ This price hike may make BT an inflationary hedge, and noting this Berenberg Bank has upped its share price target from 200p to 225p. Of course, it could also lose hard-strapped customers.

However, the inflation that justifies price rises is also causing margin pressure. And BT has a £22.8 billion debt mountain that will become increasingly expensive as interest rates rise. But long term, demand for high-speed internet through its Openreach network is likely to soar.

After Q1 results on 12 May, any input from 18% stakeholder and activist investor Patrick Drahi could drive volatile share price fluctuations.

While these are technically two companies, both of the FTSE 100 oil majors are externally affected by many of the same fundamentals.

Positively, Brent Crude remains above $100/barrel, which saw both $BP and Shell generate record profits in 2021 and pay out record-breaking dividends. Even after their painful exits from their Russian interests, both are expected to declare further record profits in Q1 results due out this week.

Key in May are the changing political winds regarding windfall taxes. Multiple Conservative cabinet ministers have argued that imposing a one-off tax on the UK’s oil majors to alleviate the energy bill crisis will hurt the case for increased investment in both renewables and further oil and gas development. This has become crucial, as the country plans to end its dependency on Russia by the end of 2022.

However, high dividends and significant share buybacks over the years make this argument politically difficult to defend. With Business Secretary Kwasi Kwarteng and Chancellor Rishi Sunak apparently at odds over what to do, local elections on 5 May could tip the scales if too many seats are lost.

Both FTSE 100 stocks could choose this week’s results to proactively announce increased investment at the expense of shareholder profits to ward off the risk.