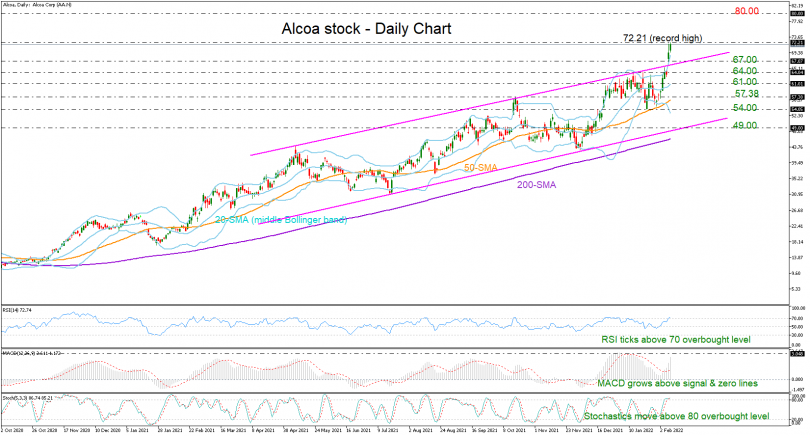 The stock has upgraded its long-term positive outlook above the seven-month-old bullish channel, though with the price having closed twice above the upper Bollinger band, the odds for a downside correction in the short-term are looking increasingly high as the RSI and the Stochastics hover in overbought territory.

A bearish reversal could initially test the channel’s upper boundary and Tuesday’s floor of 67.00 ahead of the former resistance zone around 64.00. The 20-day simple moving average (SMA), which is converging to the 61.00 round level, could next come to the rescue before the spotlight turns to October’s high of 57.38, where the 50-day SMA is currently laying. Lower, a forceful decline below 54.00 would put the upward pattern at risk, though only a step below the channel’s bottom around 49.00 would damage buying confidence.

In the event the price sails northwards in the uncharted territory, the next stop could be somewhere between the 79.65 level and the 80.00 psychological number, the former representing the 261.8% Fibonacci extension of January’s short downfall.All in all, Alcoa’s bullish trend continues to strengthen and while some weakness could emerge in the near term as the price is trading in overbought waters and at fresh record highs, buyers may not easily abandon the market unless the price dives below 48.00.