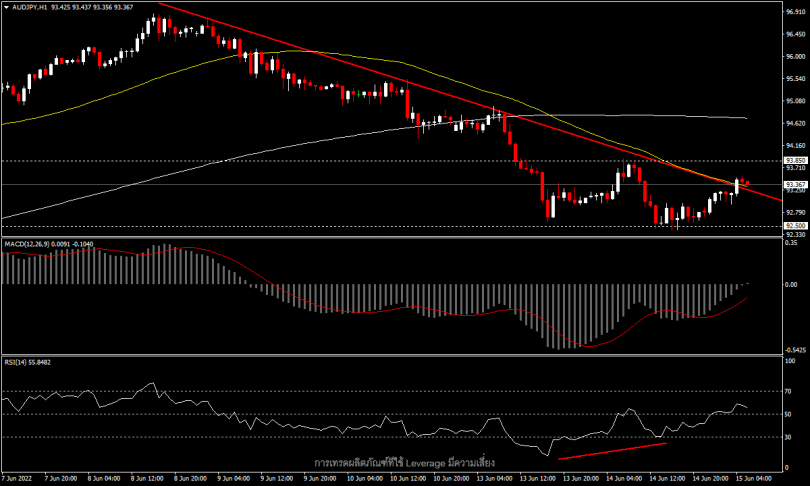 After closing the market risk since the end of last week the Japanese Yen returned to strength temporarily, compared to the world’s major currencies, but it remains weak against the US Dollar. This is a result of the Fed’s view of accelerating interest rates, and is likely to happen again this week, while the BoJ is likely to keep its interest rate policy negative.

However, the weakening of the Japanese Yen and the AUDJPY pair, one of the indicators of market sentiment, is now visible. It has risen from the June low at the 92.50 zone to trade at 93.50 now, partly due to better-than-expected May Chinese economic data. China’s industrial production unexpectedly grew 0.7% after -2.9% in April, and the unemployment rate dropped from 6.1% in April to 5.9% in May. Meanwhile, retail numbers fell less than expected at -6.7% year-on-year, compared with forecasts of -7.1% and -11.1% last month.

As of this morning, Australia’s June consumer confidence numbers continued to decline for the seventh straight month, at the lowest level since April 2020 at 86.4 (-4.5%), owing to concerns about inflation and the acceleration of interest rate hikes of the central bank.

In the technical view, the AUDJPY pair today sees a bullish divergence as the MACD is starting to enter positive territory. There was the first resistance at yesterday’s high at 93.85 and the next resistance at the MA200 line at 94.80. Key support remains at the June low at 92.50.