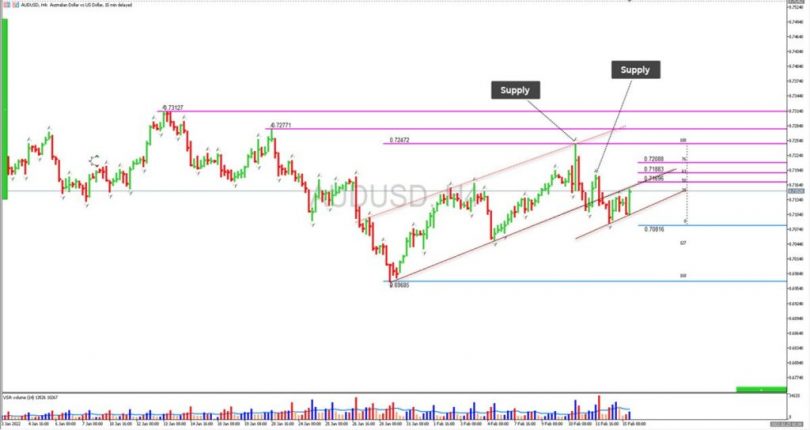 On Tuesday, 15 February, the Aussie is trading in red for the fourth straight day during the Asian session.

The Australian Dollar is marking time as global markets await the outcome of events in Ukraine, although energy and commodities prices boosted the Aussie. After recovering from a low of $0.7086 overnight, the Australian Dollar holds steady at $0.7130.

The RBA has released the minutes of its most recent meeting and said that interest rates would not be raised until the inflation objective is fulfilled. The RBA is prepared to wait but cautions that inflation has accelerated sooner than projected. According to the minutes, the RBA’s Board of Directors was unsure that the increase in inflation would be maintained and wanted to observe how wages responded before acting on interest rates.

The US Treasury yields are reinforcing the previous day’s recovery moves with a new decrease to 1.979%, down 1.7 basis points, while the USA500 Futures show minor losses at the time of writing. Despite a somewhat good week-start performance, bond coupons recovered upside momentum on Monday after falling back from a 2.5-year peak on Friday, while the Wall Street benchmark finished in the negative.

The United States State Department has announced that its embassy in Kyiv will be relocated to Lviv, in western Ukraine. It comes after Joe Biden warned that Russia will suffer a “protracted crisis if Ukraine is attacked.”  There is, however, an opportunity for a knee-jerk reaction from markets if a dispute breaks out. As a result, traders may hurry to get their hands on the Greenback.

From down under, there is no significant news today from Australia. Tomorrow Employment Change and Unemployment Rate are due to be released.  In US, PPI will be released on Thursday. Then, later in the week, there is Core Retail Sales, and Fed officials will also speak.

Mr. Adnan Rehman is a Market Analyst with 6 years of working experience in the forex industry. Due to his international exposure, he is well versed in all the technicalities and tools used to determine Forex markets. He is highly qualified, with a creative and dynamic sense of analyzing the Forex market. He is a certified Financial Consultant with qualifications such as CFP & Fundamental Analysis.