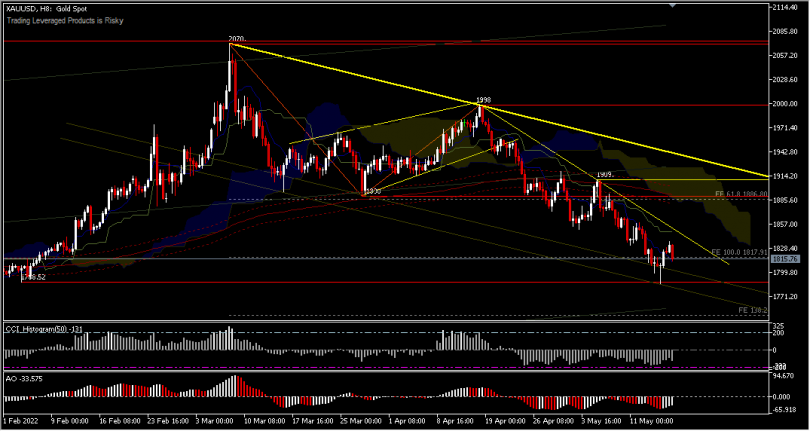 USOil gave up early gains and closed slightly lower (-0.28%), after a report said the US intends to propose European countries to impose tariffs on Russian oil at this week’s G7 meeting. Tariffs on Russian crude will keep Russian oil supplies on the market, but limit Russian revenues from exports. This decline was also due to another report that said the Biden administration would calibrate its sanctions policy in a bid to promote dialogue with Venezuela, which could return Venezuelan crude to global markets.

Meanwhile, European Union countries are still debating a further package of sanctions against Russia, with diplomats trying to overcome objections from Hungary to the proposed ban on Russian oil. EU leaders were unable to reach a deal over the weekend.

Meanwhile, Gold prices rose 0.77% on Monday after touching a monthly low of $1,788.66 in line with falling US bond yields. But expectations for aggressive interest rate hikes by the Federal Reserve is still an impediment to gold’s rally. In Tuesday’s trading, Gold was back down more than 0.5% despite a correction in the US Dollar. Spot gold is trading in the $1,815 area at the time of writing, due to the strengthening of Yields. In general the USD trend is still strong, as the Fed keeps ammunition for aggressive rate hikes in sight. The US Dollar has corrected slightly, but is still holding near a 2-decade high, so gold is still too expensive for speculators who don’t have USD.

USOIL is trading around $113.50 early in the Asia session, having hit a daily high of $115.50 on Tuesday, leaving behind a daily doji-shaped candle. A move to the upside would test the $116.58 resistance level and if strong does not rule out testing the recent tops around $125.00. Although the major oil trend is still bullish and the validation of the indicators is still very clear and fluctuations often occur due to uncertain sentiment, trading in the last 11 weeks still has not shown a clear change in direction. As long as the price is trading below the peak of $124.91, market conditions will remain volatile even in consolidation. The price level of $100.00 is still a psychological benchmark, in case of a decline to the downside.

Gold fell back to the downside, after having scored a 2-day high at 1,836.01. The intraday bias is still inclined to the downside with the price benchmark temporarily neutral at 1,800.00. The indicator is still validating the direction of the downward movement, with the price being below the 200-period EMA and Kumo. The oscillation indicator is also in the sell zone. As long as the 1,788 low holds, a bounce to the upside for 1,850 and 1,890 is still possible. A move below to a new low, however, will erase all bullish scenarios, as the price will try to test support at 1,752 and also 1,676.