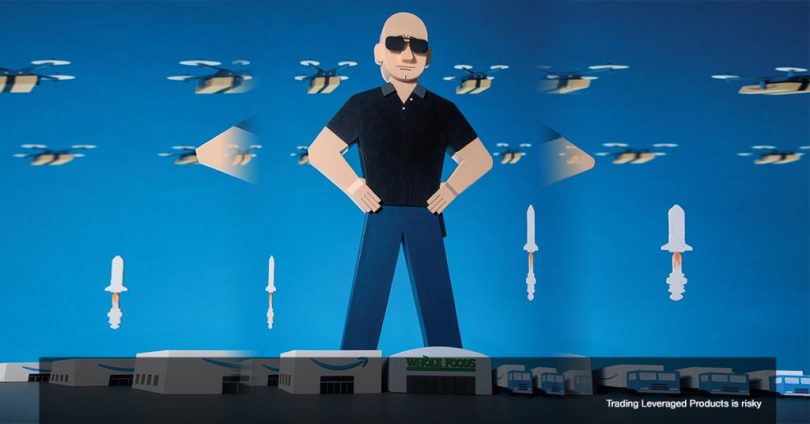 Amazon Inc., the titan of consumer products and subscription retailing, which also makes and sells electronic devices, has a market capitalization of $1215.58B. It expects to report the results of the third fiscal quarter of 2022 ending in September on October 27 after the market close. Amazon represents approximately 6.93% of the US100.

Amazon ranks second in the ranking of the main cloud application providers and with the highest brand value in 2022 according to its revenues worldwide with more than $18,000 million and $350,273 million respectively, according to Statista.

The Amazon Web Services (AWS) cloudregistered a profit increase of more than 31% in the second quarter and is expected to continue thanks to the growth of the segment that carries an increase of 35% in what goes of the year. AWS generalized the availability of its services AWS Cloud WAN and AWS IoT FleetWise where the latter helps to collect and transfer data from millions of vehicles to the cloud in real time with monetization. It also made available three serverless analytics options for Amazon EMR, Amazon MSK, and Amazon Redshift. These movements are expected to be favorable for the increase in customers and revenues this quarter.

The growth in advertising revenues which have become a growth catalyst for the company, giving an 18% growth in sales in the last quarter, is expected to remain a positive factor with growth of 24%.

The Prime Day that took place earlier this quarter on July 12 and 13 is also expected to be a key driver of earnings, giving an increase of 8.1% for its online commerce and 17% for revenue from services for outside vendors. In addition, the development and strengthening in its grocery service and grocery retailing thanks to the expansion of its Amazon Fresh stores in the US have also provided a good tailwind.

The growth and expansion of Amazon in countries such as India, Australia, the United Kingdom and Canada is expected to strengthen its position in the global market.

Its streaming services like Amazon Prime Video and Amazon Music have seen strong momentum in recent quarters thanks to the expansion in its content portfolio, possibly increasing Prime subscribers and adding to the list of favorable earnings factors as it is expecting a 13% increase, according to Wall Street.

The growth and development of Amazon smart devices with the introduction of the new generation of Echo devices (Echo Dot and Dot Kids, Echo Auto and Echo Studio), Fire TV Cube and the new Alexa Voice Remote Pro along with the growth and introduction of the new Kindle tablets (Kindle, Kindle Kids and Kindle Scribe) coupled with the expansion of its Blink and Blink Mini Pan tilt smart security cameras (some of these devices already sold out) also favor the company.

Sales of services that are higher-margin and recurring have outpaced product sales for the first time this year. This means increased profitability and cash flow for the company and its shareholders.

The strong inflation that the world is experiencing has been the main burden for the company, as it struggles with high transportation costs due to the increase in fuel and energy prices.

This coupled with interruptions in the supply chain (a mishap that Amazon is trying to solve with Amazon Warehousing & Distribution which allows sellers to solve problems related to it) and a possible continuation of the slowdown of 4% y/y in the last quarter in online shopping, which is Amazon’s main business, will have an impact on the results.

The Amazon price fell to a low of 101.39 after its stock split in June. Following this, the price gave an upward impulse until leaving highs at 146.53. After failing to maintain the psychological level of 140.00, the price formed a bearish channel that gave a discount to the Fibo 88.6% at 106.54 (lows at 105.30), and with these last 2 lows they formed a bullish divergence on the RSI.

Currently the price has recovered the 110.00 level and is above the 20-day SMA testing the psychological level of 120.00 along with the bearish direction of the channel at the time of this writing awaiting the results.

Should the gains prove positive we could see a bullish push to drive the price towards the August highs in the 140.00-146.53 area. Otherwise, and if the result is worse than expected, the price could fall again to the June lows at 101.39 and even to the psychological level of 100.00 that we have not seen since October 2009.