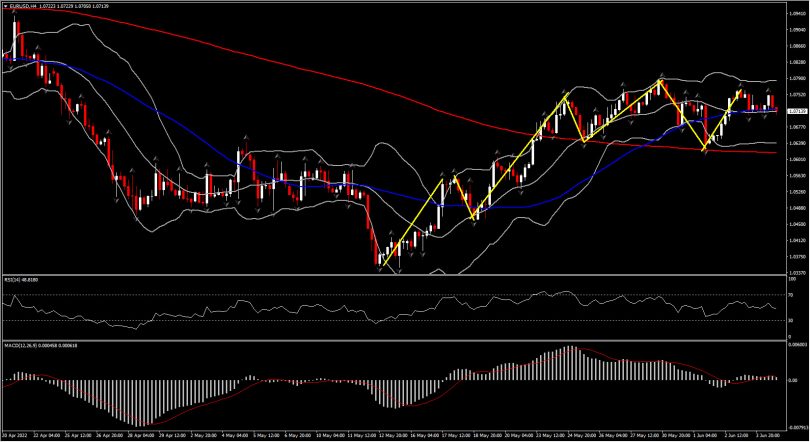 The focus is fully on the ECB meeting on Thursday and in particular President Lagarde’s press conference. Rate settings are expected to be held steady for now, and while there are some members who see the urgency to act sooner rather than later as inflation goes through the roof, the ECB’s timetable for the phasing out of stimulus effectively excludes a move on rates this week. Net asset purchases need to end first and Lagarde is expected to confirm that this will happen early in July, which would pave the way for a rate hike in July.

Lagarde has already mapped out two moves in July and September and the basic scenario is for “gradual” 25 bp steps, although the discussion on a bolder kick off with a 50 bp boost in July has already started. We suspect that Lagarde will stick with a focus on “gradualism” for now. But she will not rule out a 50 bp step as the need to maintain credibility and assert the Bank’s commitment to price stability and the 2% inflation target seem increasingly urgent.

Eurozone HICP inflation hit a new record high of 8.1% y/y in preliminary readings for May — a sharp jump from the 7.4% y/y reading in April and yet another upside surprise. The renewed overshoot will further undermine confidence in chief economist Lane and the forecasting ability of his staff. That may have partly prompted Lagarde’s move out of Lane’s shadow last week, and her apparent decision to override the chief economist’s caution on policy normalization and his renewed focus on the dampening impact of the rise in prices on consumption trends.

To be fair a large part of the current inflation picture is due to factors that lie outside of the control of the ECB and which won’t be changed by a hike in policy rates. Energy price inflation remains THE most important part — reaching 39.2% y/y in May and accounting for two percentage points of the annual rate. The Ukraine war, sanctions against Russia, and ongoing virus disruptions in China have meant ongoing and/or renewed supply chain disruptions and a sharp pick-up in imported inflation that is largely outside of the central bank’s remit.

Hence ,without decisive action the ECB now is at risk of losing control of the situation and letting inflation expectations go through the roof. Preventing second round effects has to be the order of the day. While wage growth has looked modest so far, this is a lagging indicator, and the start of warning strikes in Germany’s steel sector are a sign that the ECB may come to regret not moving earlier on rates. The IG Metall union is calling for pay increases of 8.2%, and employers are unlikely to get away with the one-off payment they have been offering thus far. The difference is crucial of course, as a one-off payment doesn’t lift wages permanently.

The markets meanwhile, also are looking ahead to the ECB meeting Thursday and the CPI report Friday, both seen bearish for fixed income. Trading was on the quiet side with few catalysts and with the Pentecost holiday in much of Europe. The 2-year rate is up 2.3 bps at 2.675%, with the wi 3-year and wi 10-year each 1.5 bps cheaper at 2.895% and 2.960%, respectively. European rates have pared earlier losses and are slightly richer, with the exception of the Gilt where the rate is up 2 bps at 2.172%, playing catch-up after the long Jubilee weekend. There are also jitters ahead of a no-confidence vote on PM Johnson. The Bund is now fractionally in the green at 1.266%, and Italy’s BTP is down 3.3 bps at 3.357%. Stocks are rallying with the S&P future and the NASDAQ up 1.0% and 1.37%, respectively, with the Dow 0.78% firmer. The FTSE is up 1.16% and the DAX is 1.0% higher.

So far the confirmation that the ECB is on course to hike rates has helped to put a floor under the Euro and put an end to talks of parity against the US Dollar – at least for now. EURUSD has settled around the 1.0630- 1.0786 mark, the past 2 weeks. Although the Ukraine war and the tensions with Russia will likely cap the upside for the single currency, especially as the risk that Russia will cut off gas supplies remains on the table and could see the Eurozone heading for a recession over the next year.

Against that background, this week’s round of data releases is unlikely to really change much, as the data are mostly backward looking. The calendar is virtually empty on Monday, with public holidays in parts of Europe likely to make for somewhat lower volumes, even if most markets are open.