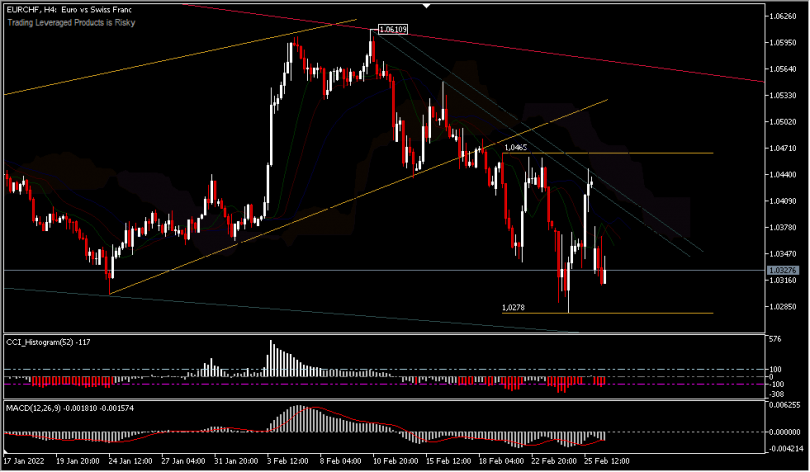 Markets opened earlier today with concerns over the likely longer-than-expected Russia-Ukraine conflict, after a number of economic sanctions were imposed on Russia from the US and the European Union. Some risk assets have started the week with wide price gaps, while hedged assets have averaged temporary gains.

Today, however, it was reported that a Ukrainian delegation had arrived at the border with Belarus for talks with Russian representatives that would focus on achieving an immediate ceasefire and the withdrawal of Russian troops, the Ukrainian presidency said in a statement.

EURCHF opened with a gap jump to the downside of more than 100 pips from Friday’s close. The market immediately ran towards the hedge asset, following the tensions that set in. Also today, Switzerland reported its economic growth grew 0.3% in the fourth quarter ending in December 2021, following an upwardly revised 1.9% expansion in the previous period and slightly below market expectations of a 0.4% growth rate. On an annual basis, the economy grew 3.7%, easing from a downwardly revised 3.8% gain in the previous quarter, in line with forecasts, while the Swiss KOF economic barometer fell from 107.2 to 105.00 in February, below expectations of 108.5. The KOF report stated “indicators from the manufacturing sector were mainly responsible for the decline, followed by indicators from the financial sector. The signal for Swiss exporters is somewhat more favorable than before.”

Last week EURCHF edged up +0.08% after briefly weakening -1.4%. The flight to safety, however, saw the pair  slip back more than -1% on  Monday’s market open. The gap down that is occurring is still above the weekly support at 1.0278 which gives little hope for speculators to buy this asset with a measurable risk. The pair is still dominantly under bear control, which can be seen from the bearish price structure that has been formed, still below the Kumo and Alligator, and the CCI and MACD indicators still being in the sell zone. The pair’s price is already near the 1.0218 crucial support area formed in April 2015 which invited a number of buying and selling positions.

The temporary bias is neutral after the gap down and prudence seems to have enveloped the market while paying attention to political developments in Eastern Europe. On the downside, a price move below the 1.0278 minor support will extend the bearish trend towards the 1.0218 support and if the risk-off mood continues to haunt the market, then a deeper downside is likely. As long as the 1.0278 support holds, a limited upside prospect is likely to seek price balance.

On the upside, a move above the 1.0465 resistance  will target 1.0610 and a move above this level at the same time would confirm a change in the direction of the bearish trend to bullish, because at that time, the descending trendline would be broken to the upside.

Overall, the downtrend will still dominate the pair unless the SNB intervenes to normalize the franc exchange rate.