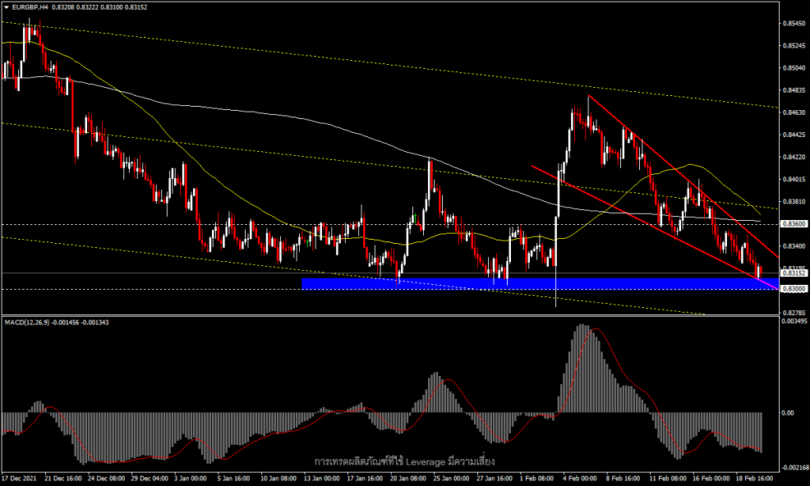 EURGBP continued its decline in February after the BoE decided to raise interest rates again to 0.5%, sending the pair back to trading at two-year lows slightly above 0.8300, with the EURUSD closing around 8 pips lower yesterday (February 21), a weekly low test, while GBPUSD closed about 8 pips higher, trying to break its weekly high.

As tensions between Russia and Ukraine continue market players are looking for trends in central bank policy. Markets expect the ECB to raise interest rates by 0.1% at its June meeting and by 0.5% before the end of the year, last week ECB chairman Lagarde emphasized the central bank’s unchanged stance regarding gradual implementation of policy. As for, the preliminary readings of the manufacturing PMI, the Eurozone for February was lower than expected at 58.4 versus 58.7 the previous month, while the services PMI was higher than expected, at a three-month high of 55.8 from 51.1 in January.

The preliminary February UK PMI data was in line with eurozone data, where the services PMI rose to an eight-month high of 60.8 compared with January’s 54.1, and the forecast of 55.6. Manufacturing PMI however, fell to the lowest in more than three months at 57.3 are the same as the previous month and slightly higher than the 57.2 forecast.

On the economic calendar today the German ifo economic survey beat expectations significantly at 98.9 versus expectations of 96.4. Later this week is testimony from BOE governor Bailey and MPC members on inflation and economic outlook before the UK Treasury Committee.

From a technical point of view the decline in the EURGBP pair in February is in a falling wedge pattern, and it is possible to see a reversal from the low 0.8310 zone where key resistance waits at the MA200 line at the 0.8360 zone. The next support line is at the lower frame line (yellow line) of the downtrend channel at the 0.8270 zone.