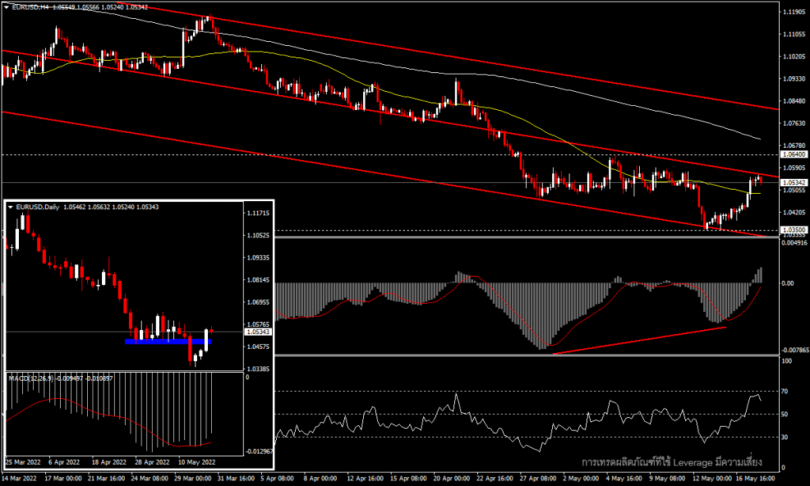 The EURUSD pair managed to regain 1.0500 yesterday after dropping to a new low late last week in the 1.0350 zone, the same area as the low seen in December 2016. This was partly due to the revised Q1 economic data for the Eurozone, with Q1 GDP revised up slightly to the same as the previous quarter at 0.3% from 0.2% in the first reading and the revised annual rate increased from 5% to 5.1%, while the preliminary Q1 employment estimates were up slightly from the previous quarter at 0.5% quarterly and 2.6% per year.

Additionally, on Tuesday, ECB official Klaas Knot signaled the possibility that the ECB would raise interest rates by 0.5% in July. Meanwhile, financial markets have now raised their bets for a year-end interest rate hike to 1.05% from the previously projected 0.95%. As a result, German government bond yields rose to 1.05%, approaching the multi-year high of 1.189% seen on May 9.

On the US side, in an interview yesterday Fed Chairman Powell said the Fed will raise interest rates until inflation clearly subsides, and continued to emphasize the 0.5% interest rate hike in the next two meetings. The US retail sales report for April rose 0.9%, as expected, after a 1.4% increase last month, and retail sales excluding autos rose 0.6% from 2.1% in March.

The EURUSD pair in the H4 timeframe has retraced above the MA50 line after seeing a bullish divergence at the end of last week. Key resistance is in the May high zone at 1.0640, which, if broken, could shift the short-term outlook to another bullish trend. However, if the price breaks the MA50 down, there will be key support in the low 1.0350 zone. Overall in the Day timeframe, there is a chance that a bear trap could provide technical support for the pair to reverse its uptrend again. However, the uncertainty of the eurozone lingers on the protracted war in Ukraine.