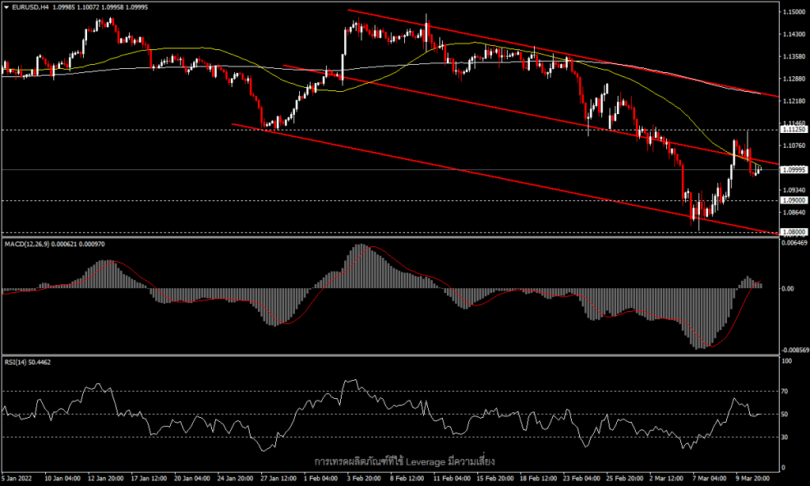 Meanwhile, on the US side yesterday, February inflation numbers were reported at a record 7.9% year-on-year increase from the 7.5% seen in January. This is the highest record since January 1982 (40 years) and will likely bolster the Fed’s aggressive policy tightening decisions at the meeting next week. As Fed Chair Powell said last week, he supports a further 0.25% interest rate hike (to 0.5%), but the Fed may move more aggressively if inflation does not fall as expected.

The higher-than-expected inflation report helped support the US Dollar overnight. The USDIndex rose to a high of 98.63 from yesterday’s low of 97.68, while last week’s unemployment numbers rose from a week earlier to 227k from 216k (modified from 215k).

Despite the surprise of the ECB accelerating the cuts in APP purchases, overall the ECB is still moving slower than the Fed. Meanwhile, Europe is experiencing price pressure from the Ukraine war, especially the price of energy which is fluctuating heavily.

EURUSD is regaining its foothold at 1.1000 below the MA50 after moving to a high of 1.1120 this week on the volatility of the US Dollar. And at the lower MA50 level, this short-term view of the pair is skewed again downward, where the MACD is now crossing the signal line near the 0 line and the RSI is falling back down to the 50 level, so the first support is at the bottom. It is now at the round number 1.1090 and the next key support is in the nearly two-year low zone of 1.1080. On the other hand, if the price is able to rise above the MA50 line, there will be the next resistance in the high zone first at 1.1125.

Important information on today’s economic calendar includes the February inflation report for Germany that was in-line with expectations at 0.9% and 5.1% y/y. Later today there is the UoM Consumer Sentiment Index, which is expected to have declined to 61.4 from 62.8.