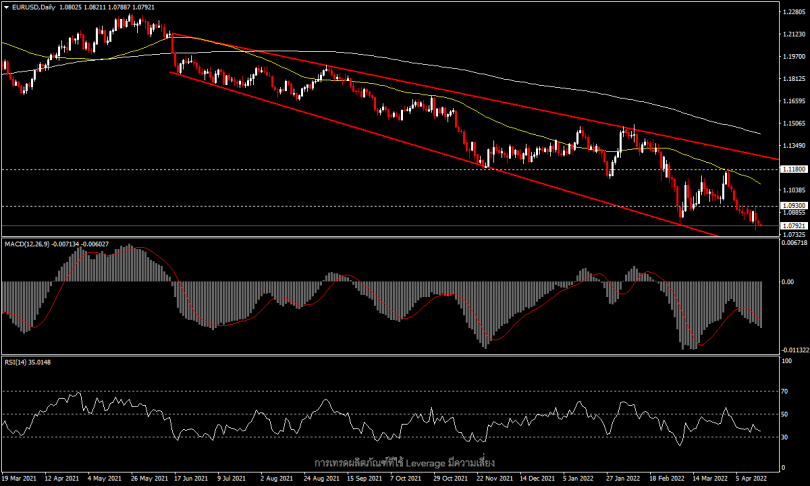 The Euro continues to be pressured, with a new two-year low below 1.0800. After last week’s meeting, the ECB kept its interest rate unchanged at 0%, while QE could end in the third quarter in line with expectations and may be followed by an interest rate hike thereafter. The net buy target for the APP project in April, May and June will be 40, 30 and 20 billion Euros, respectively. Aside from the ECB’s move, the war in Ukraine is another key factor that is raising the uncertainty of the Eurozone economic recovery.

As the week started, EURUSD continued its decline into the third week. On the strength of the US Dollar, the USDIndex remains in the high zone of 100.66, in line with a new high in the US 10-year Treasury yield, which this morning hit a new high of 2.88%, the highest in more than three years.

Key events to keep an eye out for this week include preliminary reports of PMI numbers for both the US and the Eurozone including the movements of the central bank. There will be a speech from Fed chief hawk Bullard tonight (April 18) and from Fed Chairman Powell on Thursday. ECB President Lagarde has speeches on Thursday and Friday.

From a technical perspective, the EURUSD pair in the Daily timeframe remains stuck in the broadening falling wedge price pattern that has been forming since the death cross in July last year. So there’s a chance we’ll see a reversal from testing the year’s low zone again (corresponding to a continuous divergence in the H4 timeframe), with the first resistance at the 1.0930 zone and the next resistance at the month high zone at 1.1180. On the other hand, if the pair continues to decline there will be a key support in the March 2020 low zone at 1.0640, which marked the beginning of the coronavirus crisis in Europe & North America.