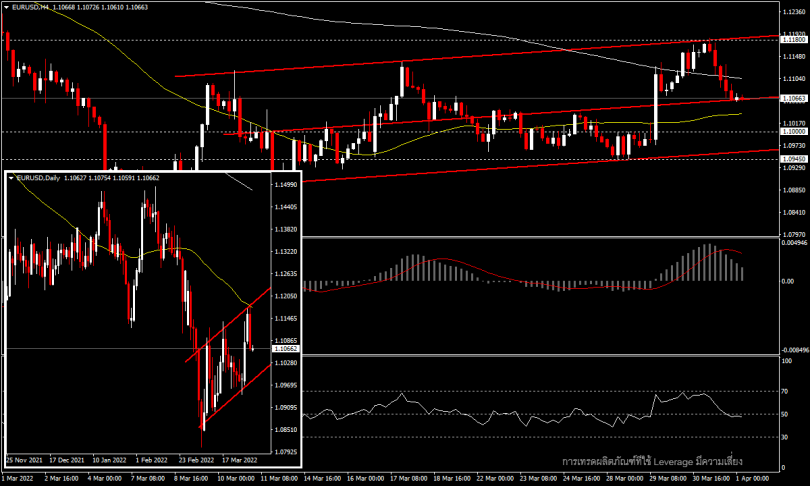 The peace talks between Russia and Ukraine in Istanbul appear to have been just a delay tactic in order for Russia to adjust its military position. As expected by many parties, the retreat from the area near the capital Kiev turned into an increase in troops in the Ukrainian naval sector. In addition to this, Russia continues to emphasize a desire for oil and gas buyers to pay in rubles and as a result, the ruble is now strengthening to pre-war levels again. The US stock market and closed for the second consecutive day over -1.55%.

Such concerns caused the euro to weaken again yesterday against other major currencies, especially safe haven currencies. EURJPY dropped to a low of 134.50 before bouncing back to 135.20 now. EURCHF made a fresh weekly low of 1.0206, now at 1.0230, while the EURUSD pair has fallen to 1.1050 from the three-week high zone at 1.1180.

Meanwhile the US Dollar was back in demand as a safe haven currency with a boost from yesterday’s US economic data. Key inflation figure, the PCE, climbed to a four-decade high of 6.4 percent annually, as did the Chicago PMI, which rose higher than expected at 62.9, compared with 57.0 and 56.3 the previous time. However, weekly unemployment claims rose slightly higher than expected at 202K versus 197K and 188K the previous week.

Today, Eurozone HICP inflation jumped to record high of 7.5% in March, while the February number was revised up to 5.9% from 5.8% reported initially. While the headline was markedly higher than initially anticipated, Core actually was a tad lower than feared, although it still lifted to 3.0% from 2.7%. Excluding energy, core lifted to 3.4% and the preliminary breakdown revealed a 5% rise in food prices, alongside a 44.7% jump in energy prices. The spike in the cost of living is squeezing disposable income and weighing on consumer confidence as survey data clearly indicated. That will weigh on demand and hit the services sector at a time when manufacturers are struggling with the fallout form the Ukraine war and the sanctions on Russia. Against that background, ECB chief economist Lane continues to stress the temporary factors that are driving the uptick and this week effectively removed the tightening bias, when he said the ECB needs to be ready to move in either direction. The comments were clearly designed to prepare the ground for a high inflation report and prevent markets from running away with the tightening story. With a war on the Eurozone’s doorstep, the negative implications on the growth outlook will be much more pronounced than in the US and that means policy divergence and ongoing accommodation for the ECB, even as the Fed is continuing to remove stimulus.

The focus for today will be on the March Non-Farm jobs numbers, which are expected to increase to 490K from February’s 678K. Other labour figures are also included, including ISM Manufacturing PMI.

Technically speaking, the EURUSD pair in the H4 timeframe is now stuck between the MA50 and MA200 lines where the RSI has flattened near the 50 level, indicating a potential short-term retracement in the price ahead of this evening’s important event. In the Day timeframe, a bearish flag pattern is seen, indicating an opportunity for the price to continue in a medium-term downtrend. The first support today is at the round 1.1000 and the next one is at the Week low at 1.0945, while the key resistance stands at 1.1100 which converges with the MA200 line. If broken, the next resistance Is at the high zone before 1.1180.