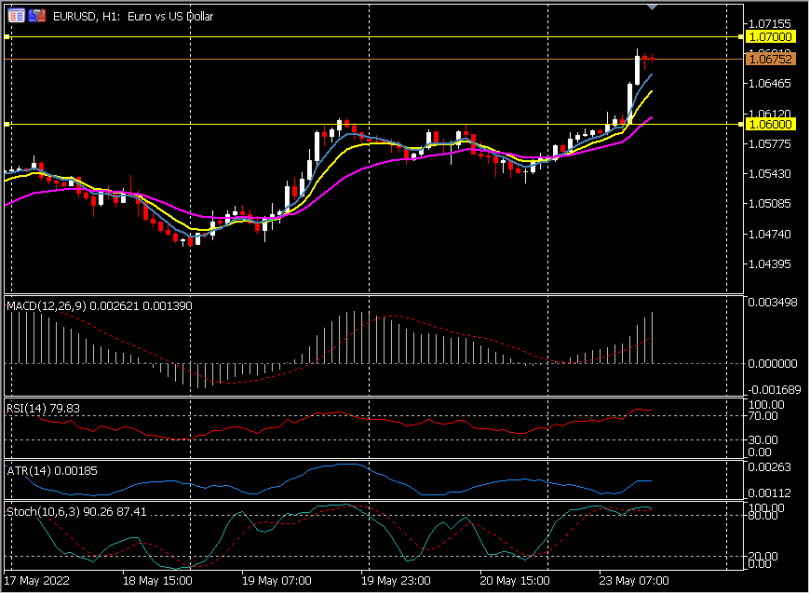 German Ifo index unexpectedly improved in the first rise since February, i.e. since the start of the Ukraine war. The expectations index nudged only fractionally higher – to 86.9 from 86.8, but the current conditions indicator improved markedly – to 99.5 from 97.3, which left the overall reading at 93.0 – up from 91.9 in April and again the highest since February. The good news is that the rise in the headline didn’t just reflect an improvement in the services sector, which continued to benefit from the lifting of virus restrictions. Sentiment in manufacturing, trade and construction also improved, which suggests a broad based stabilization in sentiment that is encouraging and suggests that companies are gradually adjusting to the new situation in Europe, even if supply chain disruptions and the jump in energy prices will continue to keep a lid on the overall outlook. More arguments in favour of a July rate hike then as the economy looks a bit more stable than feared.

ECB’s Lagarde also flagged a lift off on rates in July. The central bank head said in a blog post that she expects “net purchases under the APP to end very early in the third quarter”, which would allow the ECB a “rate lift-off” at the July meeting. She added that “based on the current outlook, we are likely to be in a position to exit negative interest rates by the end of the third quarter”. So Lagarde is full on board with rate hikes now and the central bank’s path is increasingly clear. The comments saw the German 2-year rate jumping 3.6 bp to 0.35%, but the curve flattened as the long end outperformed, even as the 10-year lifted 2.4 bp to 0.96%. The reaction highlights that the difficulty for central banks is how to show sufficient resolve to keep a lid on inflation, without sparking concern that aggressive central bank action will hurt the medium term growth outlook.

EURUSD has spiked to a 19-day high today, at 1.0688, EURGBP is up at 0.8488 but remains capped at 0.8500 and EURJPY holds over 136.00 at 136.15 having peaked at 136.20. The break of Thursday and Fridays high at 1.0600 proved significant for the EURUSD earlier, and the H1 timeframe remains supported. However, the cap now sits at  the psychological 1.0700 and both the RSI (78.20) and Stochastic indicators are suggesting overbought conditions.  A speech from Deutsche Bundesbank President, Joachim Nagel, later at the “Monetary policy, policy interaction and inflation in a post-pandemic world with severe geopolitical tensions” at the Oesterreichische National Bank Annual Economic Conference, in Vienna could impact the pairs move later today.