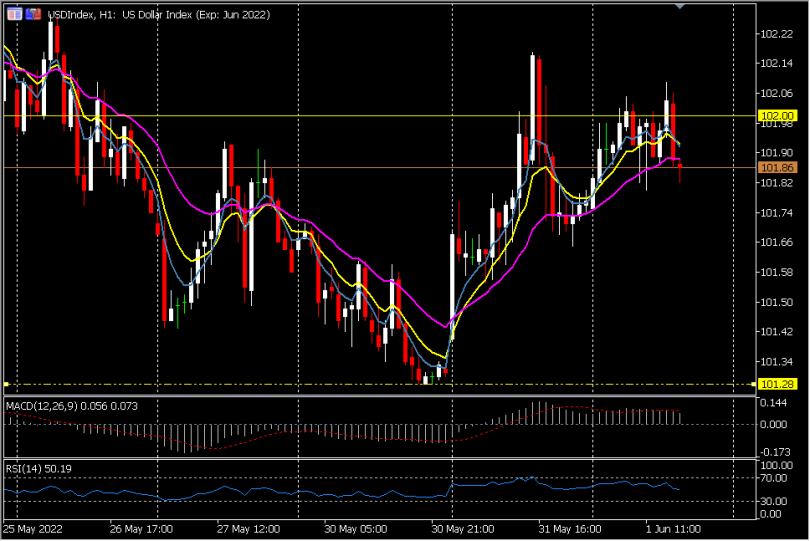 US stock indexes moved to the upside in premarket trading on Wednesday, after Treasury Secretary Janet Yellen reiterated the internal top priority at the moment is lowering inflation. After a stronger start to the day, there was a sudden drop in risk appetite. US equities and bonds fell rapidly, leading to further strengthening of the US Dollar.

The quick reversal may serve as a reminder of bearish market conditions and significant risks from inflation, which is still showing no sign of any meaningful easing as the central bank continues to tighten its belt. Late in the day, the overall index closed lower, after the Fed released its latest Beige Book in which it noted that certain districts in particular expressed concern about a recession. Higher T-note yields on Wednesday also weighed on stocks as the 10-year T-note yield rose to a 2-week high of 2.95%. The S&P 500 closed down -0.75%, the DJIA closed down -0.54% and the Nasdaq 100 closed down -0.74%.

The Fed officially started quantitative tightening today and the BoC raised interest rates by 50 basis points to 1.50% as expected. The ECB is expected to exit negative interest rates in the next few months. Inflation continues to push the market and rising oil prices weigh further.

The golden years for  equities due to stimulus support may be over, as seen from the declines in stock prices, which are not uncommon in tightening cycles. This trend is likely to continue, as the Fed begins shrinking its balance sheet by $95 billion or even more in the future.

From the data, the May ISM Manufacturing PMI unexpectedly rose to 56.1 from 55.4 in April, beating the market forecast of 54.5. Meanwhile, business sentiment remains very optimistic regarding demand, but supply chain and pricing issues remain the biggest concerns. The number of job vacancies in the US fell to 11.400 million in April 2022 from a revised record high of 11.855 million in March, matching market expectations and showing companies are continuing to struggle to recruit new workers. Meanwhile, about 4.4 million Americans quit their jobs in April, little changed from the previous month, with the so-called quit rate unchanged at 2.9%.

Stronger-than-expected economic data suggests strength in the economy. However, a stronger economy could prompt the Fed to be more aggressive in tightening monetary policy.

The USA100 has posted losses of more than 22% in the 5 months from January 2022. Trading on the first day of June also posted additional losses for Q2. The 26-week and 52-week EMA deadcrosses represent serious declines in the 2nd wave which both registered more than 20% losses with the first descending wave. Even though the RSI is showing oversold, the market could still bleed, if what JPMorgan Chase CEO Dimon said proves to be true later on. He warned investors to prepare for an economic storm as restrictive Fed policies and the war in Ukraine have created unprecedented challenges.

The USA100 rebound from 11,489 is temporarily stuck at the 12,925 price level. This rebound still provides hope for near-term buyers who are eyeing a breakdown of the bearish structure at the minor resistance 12,580 which was broken at the end of last week. The price is currently at the 20-day moving average. Further strengthening of the index has a chance to test the resistance level of 13,555 or around the 50.0% retracement of the second descending wave measurement, if there is a break of the minor resistance of 12,879 this week.

The AO and CCI 50 histograms are approaching the midlines, indicating normalization before further price acceleration occurs. On the downside, a move below the 11,489 support should reaffirm the fear-hauled market sentiment over the prospect of stagflation and could lead the price to test the 61.8% FR level around 10,500 (from a low of 6,632 to a top of 16,767).