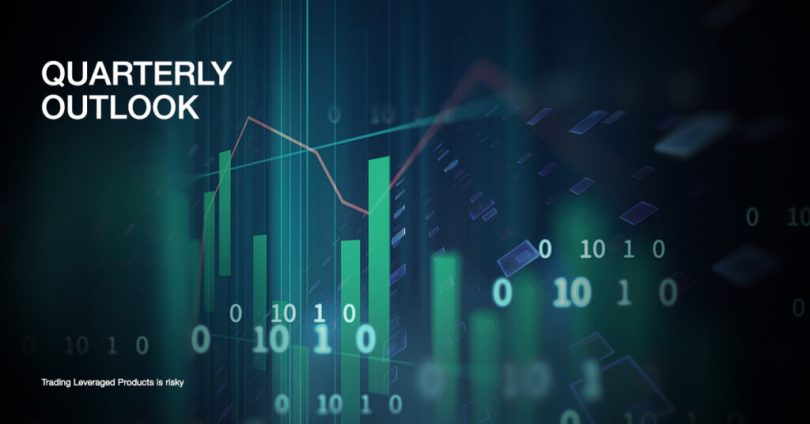 World commodity prices soared in the first quarter of 2022, but this was overshadowed by the major geopolitical crisis following the Russian invasion of Ukraine, which in turn was followed by massive economic sanctions on Russia by western countries, and instead concerns over commodity supply chain disruptions made the headlines.

Gold: Gold was the most volatile commodity in the first quarter of 2022, with the XAUUSD price soaring to a new record high since August 2020 at $2,070 in early March before declining again and trading in the $1,900-$1,950 range. The significant increase in the price of XAUUSD was contributed by several factors apart from the Russian-Ukrainian situation , such as the high rise in inflation in the United States which also caused investors to turn to safe haven commodities as a ‘hedge’ instrument to their investments.

For the 2nd quarter of 2022, we expect the movement of XAUUSD to continue to be dominated by high inflation factors around the world. Geopolitical instability is expected to slow down the post-Covid supply chain recovery, thus keeping inflation at a high level and creating high demand for gold. On the other hand, Central Banks such BoE, ECB and the FED have shown that they are ready to act in the fight against high inflation. The BoE has raised rates 2 times and the FED raised interest rates in March, with the market expecting a further raise by 50 basis points in the next policy meeting, while the ECB is expected to follow in the footsteps of the other central banks in the future. The XAUUSD could face pressure ahead of the next FED and ECB policy meeting in the Q2, though history shows that XAUUSD has been able to hold up well after central bank interest rates raises.

XAUUSD is expected to remain traded above the $1900 level in the Q2 2022. If demand continues to rise, the first target is the Feb high at $1,974, with the psychological level of $2,000 the main focus followed by the 2022 high at $2,070. If XAUUSD is depressed following the central bank’s aggressive action, the first defense at the March low of $1889 will be a bulwark followed by the weekly 50 SMA support level around $1,827. The February low at $1,788 is the bulls’ last support to remain relevant.

Oil: World oil prices soared to levels last seen in 2008 following Russia’s invasion of Ukraine as concerns over a protracted war disrupting the oil supply chain caused investors to panic. This caused world crude oil prices to soar by almost 70% for UKOIL and USOIL. Restrictions on oil exports to Russia by the UK and the US have clearly affected oil supplies, which have also led the US to release their oil reserves to the market to offset high demand in the post-covid economic recovery.

UKOIL jumped to a high of $133 a barrel in March before declining again and is now trading around $100 a barrel, while USOIL jumped as high as $125 before slipping back to around $97 a barrel. Volatility remains high in oil trading due to the still tense geopolitical situation and lack of positive signs from the Russia-Ukraine peace talks. Despite the UK and US announcing restrictions on Russian oil imports, other European countries are still reluctant to impose sanctions due to their dependence on oil imported from Russia. OPEC+ also announced that they will increase the oil production quota by 432,000 barrels a day in May to balance market demand and try to bring down oil prices. UKOIL has declined after hitting its highest level since 2008 at $133, and is now declining again after a calmer period, which indicates the bull rally is now losing steam. Prices for the 2nd quarter are expected to hover at a consolidated level between $100-$115, with pressure still on the upside. If there are positive signs from the Russia-Ukraine issue, the UKOIL price is expected to return below $100 with the consolidation level between $87-$90 being an important support level.

The same situation can be seen in USOIL with the bull rallies now losing momentum. The US government’s aggressive action in controlling oil supply in the market seen to have stabilized USOIL prices below $100 after soaring as high as $125, as the US plans to import more crude oil from Canada provide relief to investors. Price pressure is still upward with $100 being an important psychological level followed by an important ceiling level at $108. For downward pressure, $92 is an important support followed by $88 which is also the main support level.

Palladium: Like other major world commodities, Palladium also experienced a price spike after the Ukrainian crisis erupted in early March. Palladium jumped as high as $3,432 following concerns of supply cuts following economic sanctions on Russia, as Russia is one of the largest producers of Palladium which is widely used in the automotive industry. However, Palladium prices declined again after large mining company Nornickel said that supply would not be affected and they had restructured logistics routes for Palladium exports. This resulted in massive sales by investors and Palladium falling back 35% to the $2,248 level.

For the Q2 2022, investors expect positive developments from the crisis of Ukraine will continue to push Palladium to lower prices. The support level is currently seen at the weekly 200 SMA at $1,909, while selling pressure above this level would activate support at $1,536. For a rise, the bulls need to pass the resistance level at the week’s 50 SMA at $2,325 followed by the psychologically important level at $2,500.

Copper: Copper also posted a record high price following the Ukrainian crisis, at $5.0350, before declining again and trading flat around $4.7080. The current situation disrupting production from Russia is expected to keep Copper prices at high levels for the 2nd quarter. In addition, the increase in military allocations in Europe following the Russian threat is expected to keep demand for Copper at a high level. Concerns are now directed at the possibility of slower growth of the Chinese economy, where demand in the construction industry is expected to decline following the problems of large companies related to the real estate industry in China.

For the 2nd quarter of 2022, Copper prices are expected to remain stable with high demand followed by relatively inelastic and limited supply. Copper prices are expected to remain in a narrow range between $4.5000 to $4.8000 as seen since mid-May 2021. The weekly 50- SMA is the closest support at $4.4300 followed by the important support level at $4.0000.