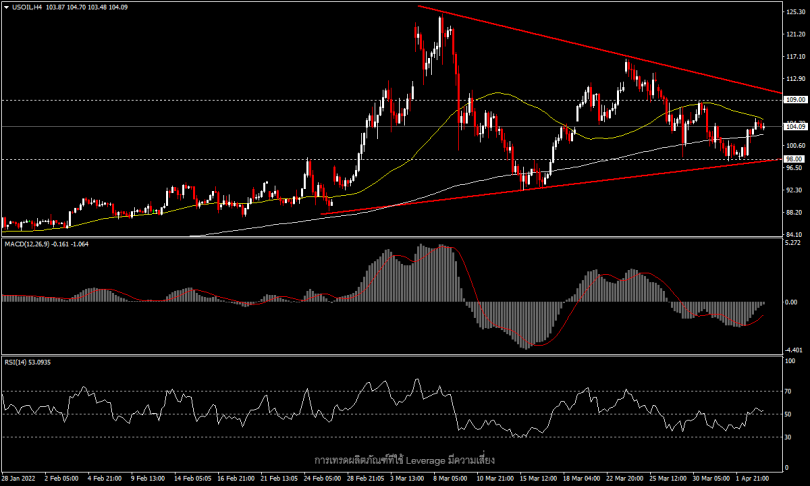 USOil prices hit $105.00 a barrel today as the US and European countries announced a new round of sanctions against Russia following news of civilian deaths in northern Ukraine. That means there is a possibility of further sanctions, which may lead to disruption of supply.

Meanwhile, plans to release 180 million barrels of US oil reserves and 30 to 50 million barrels from allied nations over the next six months don’t seem to have deterred the rising oil prices, which seem likely to continue rising until the resolution of the Ukraine war. As negotiations for a nuclear deal with Iran begin to falter, there are signs of another disruption after the US expressed concern that the deal could legitimize Iran’s nuclear activities, including potentially becoming a back door for Russia due to the Iran-Russia trade relationship, which could affect sanctions.

In the H4 timeframe, the price is swinging in a narrowing triangle, stuck between the 50-period SMA and 200-period SMA. If the price breaks out any of these moving averages it may retest in the short term the triangle’s trendlines. The resistance at the top line is in the 109.00 zone, while the support at the bottom line is in the 98.00 zone.

If there is no new progress on the war in Ukraine the current price pattern seen now may be tested by API weekly oil stock numbers report today and the EIA report tomorrow. According to the latest report, oil inventories have dropped sharply over the past two weeks.