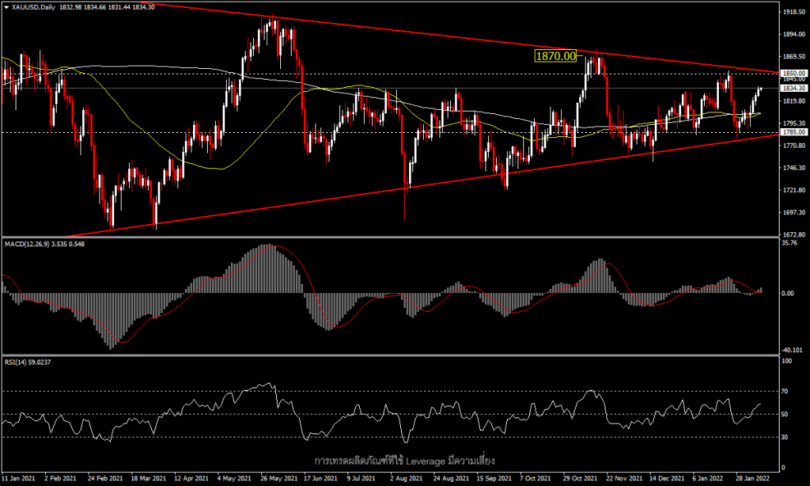 Gold prices have risen in two weeks. Ahead of today’s reported US consumer price inflation, it is expected to continue rising to 7.3% year-on-year in January from the 7% seen in December. This is the new highest level since June 1982. Monthly inflation for January is expected to continue to decline to 0.5% monthly from 0.6% (first estimate of 0.5%) the month prior. Core inflation, excluding food and energy prices in January, is expected to decline to 0.5% monthly from 0.6% the previous month.

However, the surge in gold prices occurred while market sentiment was recovering and global bond yields rose to new records in several years. The 10-year US yield this week hit its highest since late 2019 at 1.97%, now down 1.925%. This week the USDIndex it is resting around 95.50 after a heavy drop last week.

Therefore, for the reason that market sentiment is recovering and higher bond yields, this round of inflation reports has turned into uncertainty for gold prices. As an asset that does not return dividends and likely higher interest rates due to higher inflation the top could be in for Gold for now. Next could be the Fed’s growing aggressive outlook at its March meeting, which can track the stance of the Fed from Friday’s monetary policy report and the minutes of the FOMC meeting next week.

The above view is consistent with the technical view. At the moment, the gold price is still swinging within the triangle frame near the resistance 1850 that if it can break up there will be next resistance at 1870. Conversely, in a bearish view, there is the first support at the MA200 at zone 1808 , the year’s low at 1785 and December support at 1770.